Our Absolute Ingenuity and Progress

Four views of comet Tempel 1 as the Stardust spacecraft swept past.

The absolute ingenuity of us humans and how far we have come since our cave-dwelling days is supremely demonstrated by the return of pictures by the spacecraft, Stardust.

In this case, 12 years ago, Stardust was launched to look at an asteroid then collect samples from the dust of a comet, Wild 2.  It did all of this wonderfully.

Then, in the meantime, another spacecraft, Deep Impact, had been launched which crashed a small craft into another comet, Tempel, back in 2005, creating a crater.

The fantastic demonstration of our technical expertise is that almost on a whim, it was decided to get the first craft, Stardust, to have a look at this crater and beam the picture back to us – and it did all of this automatically, 336 million km from Earth, which a radio signal takes 18 minutes to travel! 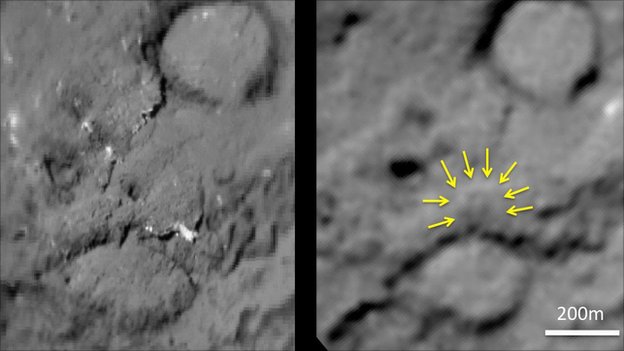 Evidence of the crater: Left shows a Deep Impact photo from 2005; Right shows Stardust’s image with a small extra crater.

Our Reluctance to Depart from our Hunter-gatherer Past

Some people still hunt for sport.  Some nations dress hunting up with weasel words and hide their blood-lust behind the veil of science.  Such a nation is Japan which kills whales for “scientific research” (900-odd this year) yet openly reveals this research as a fraud with with the real goals of short-term monetary gain and blood lust .

Whale for Sale: Sales of whalemeat have fallen, despite promotion

Here we see an advert for the “research” results.

It’s a desperate thing to see this because the Japanese claim that there lots of whales to eat – which was exactly what was said about the blue whale, right whale etc, all of which are now rarities of the ocean when once, they were plentiful.

It’s now being revealed by real research, that the more diverse an ecosystem is (and we live in one, you know), the more chance we will have of surviving all manner of disasters – disease, drought, climate change etc.

So we should all thank the people from the Sea Shepherd Conservation Society who have peacefully risked their lives “for the bigger picture”.

It’s another aspect of humanity revealed to me today, in the news.

The whalers say constant harassment has forced them to suspend operations – well dah!

That’s the definition of bravery, as seen in these dramatic shots.