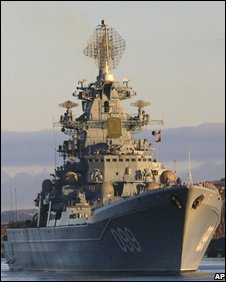 Following on from the two bombers landing in Venezuela only 11 days ago (which I reported here when talking about the decreasing effectualness of Bush and USA power in the world), they will shortly be joined by a mean and capable looking ship called Peter the Great as well as a few others. They are going to do joint manoeuvres.

It’s interesting to compare the different news reports of this event, which, after all, is only the departure – not the arrival!

The BBC is the least inflammatory with the “facts”, reporting it as a rebuff to the “United States”, but not elaborating any further on anything.

AFP seems to be a bit paranoid with their description of International and Venezuelan waters as defined by International Treaties, as “near US waters”.  And while pointing out that the US, before any of the recent Georgian crisis had started, had already activated it’s Fourth Fleet before the summer, AFP felt disinclined to wonder why even Kennedy didn’t need it during the Cuban Missile Crisis nor anyone else since 1950!

The Times, whilst being over the top in the headline, at least points out that the US sent it’s flagship on a “mercy” mission to deliver “aid” to Georgia.

No-one pointed out like I did, that a real mercy mission wouldn’t send a military flagship, but a cargo ship or two!  And thus no-one has pointed out the hypocrisy in our Western Leaders’ actions. All these ramping upwards gestures of military posturing are just that!  Posturing without a plan – it’s pathetic.

But the real way forward in all this is not boorish posturing.  All of the USA actions could have been done better without loss of face or esteem.

Dialogue and understanding is the way forward; “jaw,jaw not war,war” as Churchill said.

A serious exchange of ideas and intent is needed at this very dangerous time.

We and they know we can really destroy each other completely.   With that thought, there is obviously no need for posturing.  It serves only to bolster the self-image of the main protagonists for their people at home… Bush, Putin, Chavez etc.

Once this is understood, military actions will be seen as worthless and the preliminary posturing as even less so.  The value of the word worth has become even more important now that the world has woken up from it’s betting craze with crashed banks and financial institutions.

What is money worth?

What is war worth?

What is life worth?