Admiral Mark Fitzgerald told the BBC that  Somali pirates ‘hard to defeat’.  So even though NATO want to install missiles all over Europe to counter a mythical threat, and even though they have highly advanced RADAR, monitoring and communication systems, they still can’t manage to do what the Royal Navy did very effectively 200 years ago using wooden ships with cloth sails;  That is,

Apparently, he says it’s because they keep themselves hidden until the last minute so that it’s very hard to tell if they’re pirates,… … … or not.

Er.  That’s what it was like 200 years ago, me whinnying heartie!

How do you prove a guy’s a pirate before he actually attacks a ship?

You’ve got the most powerful navy on the world.  Reach an agreement with all commercial nations that it’s okay to stop and check every ship passing through the Straits.  Say for a year.  Reel some along if it’ll help.

If you can’t get agreement, do it anyway.  You normally do when it comes to the actual killing, why be so coy now?   Just like Iraq 1, Iraq 2, Afghanistan, Grenada, Chile, Salvador, Honduras, Cuba…….zzzz 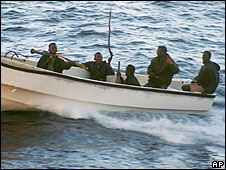 So Admiral, you have a fine career record and loads of take-offs and landings, a batch of medals and a clutch of command postings that would make any list maker jealous.  So just sit in front of a radar screen and listen in on the walkie-talkie stuff going on (the pirates are organised and have synchronised attacks so they must have radio).  Employ the odd Somali who can interpret the chatter (yes, amazingly pirates don’t speak American like in the movies).  Then go on deck, look down, and the teeny tiny little boat with six guys in it, armed with rocket launchers and guns,

They are the pirates!

If you need any further help, ask Jack Sparrow.