This is not a rant comparing the US military against others for effectiveness.  It’s purely my observation of events and appearances surrounding the current (10 years!) piracy problem on the high seas.

This is the homepage of the US 5th Fleet above. All clean and big and modern and powerful and heroic (Take My Breath Away, Tom).   Well, that’s the impression I see it as trying to project. It’s purpose (apart from the usual political puff ) is to ensure Arab oil reaches America and Western Europe.

This weeks events with the hijacking of 300,000 tonnes of the stuff wrapped up inside a tanker prove that either hi-tech doesn’t work or isn’t being used properly. 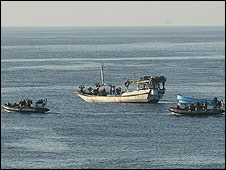 Contrast this with another attempted hijack by the pirates last week.  The attempt on a Danish ship was rebuffed and some pirates killed, the rest surrendering under “intense and surprisingly accurate fire”.  This fire was delivered by some Royal Navy Marines, sat in rubber dingies!

They had been sent to interrogate the small pirate dhow from one of two small military vessels, HMS Cumberland  and the Russian Neustrashimy.  The BBC story and one from TASS both corroborate (click photos to view stories).

The “success”, if that’s what people’s death is, is that getting stuck in at ground level is the way forward.  Floating around in zillion dollar machinery does nothing.  The capture of the Sirius Star demonstrates the triumph of mismanaged resources over common sense pragmatism.

As a reminder, this is a picture of the supertanker, just captured by men in wooden dhows!