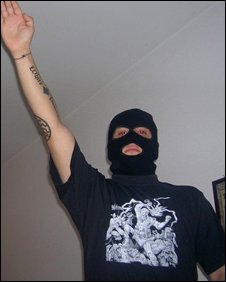 The actions of a bunch of young Nazis leave no doubt in my mind that the sentences they received for their violent actions should have been levelled against their deranged feeble-mindedness and not their violent excess of hatred.

How else could you describe someone who emigrated to Israel, then sets up a Nazi organisation and then beats up and injures various groups like highly religious Jews, homsexuals and drug addicts.  On top of all this, they filmed and photographed the violence and themselves at their meetings! As if no-one will notice them!

As a plan it’s got to be one of the most incompetent and useless ones I’ve seen for years. Much worse than any of Baldrick’s.

The maximum sentence handed out to the devils was 7 years.  If however they’d been shown to be mentally retarded and emotionally decrepit they could have been locked away for good!

And that’s where they should stay until, like any mental patient, they are let out when fit and capable of mixing with normal society.

I know it doesn’t fit in with the eye for an eye, tooth for a tooth dogma that’s plagued that area of the world for thousands of years – but hey, I’m not Jewish and don’t ascribe to any of the “Abraham-based” doctrines.

Now here’s a cheery book at left.  My daughter just asked me if I’d read it as she’s currently using it in some research of hers. It’s just to remind ourselves how absolutely mad Nazis and that type of thinking really is!  – And no, the stories and pictures aren’t forged like our very own BNP (National Front with a tie) would have you believe.

Go and speak to one. Ordinary people, true witnesses to history.