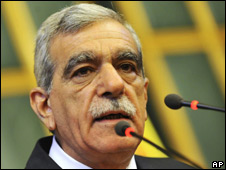 The problem, in fact, is older than Turkey, older than the 20th century creations of Iraq, Iran, Saudi Arabia etc.  The problem is the continual denial of the Kurds, and ancient people with their own language.  They’ve survived in the same area despite the incursions and massacres of Alexander the Great, The Mongols, The Murghals, The British, The Ottomans, The Turks and The Iraquis under Saddam Hussein.  An almost endless list.

And yet to speak their language is banned even though 20% of Turkish nationals are Kurdish speakers!

Recently, the wholesale language ban was lifted, but not in parliament.  Parliament is a place where you go to speak and be heard.  Turkey continues to strive for entry into the European Union.  They should try the British model…

For centuries a similar state of affairs existed between the native Welsh and foreign English upstarts who first invaded and then took over the Island.  Nowadays Welsh in Wales is everywhere.  Welsh MPs are allowed and do speak Welsh in the Houses of Parliament.  However, to make their point, they always speak in English because the whole point of their existence is to be heard and understood.  If the majority of your listeners cannot understand you, you’ve failed to communicate?

Things are slightly different in Turkey, but not greatly.  Turkey should allow Kurdish speech;  Mr Turk and others can make a symbolic speech or two;  and afterwards they can all get down to the real business of communication and solving their common problems.  It’s happened here in the UK with Wales, Scotland and even Northern Ireland.  There have been enough major wars on this small island over the last few centuries to put any doubts over our capacity to kill ourselves aside.