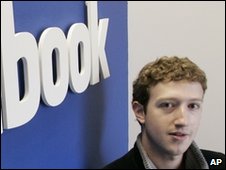 The news that not only have Facebook users suffered another viral surge (previous virus report on koobface here) but also, that their data might be used forever in howsoever the sweet faced bloke in the photie wants should scare them all a bit, I’d have thought.

The fact that he’s said that the data is safe and users will have control and the data will be erased if a user wants to drop out should be taken in the context of the average user’s IT & database knowledge and their will-power at using legal process and demanding to see all data to ensure these erasing acts are in fact carried out.  After all, how can you check?  Mark Zuckerberg has only said that this is going to happen.  If I say,

My father is a hamster and my mother smells of elderberries…

Also, despite the surge in malware, the sweet faced blokie doesn’t want to lock down his big application to save it’s and his customers’ hurt from the little (possibly dodgy) apps!  See here; Facebook boss rejects app controls

Well at least the boss is consistent with his customers….

The story is, and I’ll quote as it’s the best way to tell the intro;

I know a computer science professor who runs the same Facebook experiment every semester. He invites his students to stand up in front of the room and show everyone their Facebook page on the big screen. No one has ever taken him up on the offer.

Why? They’re embarrassed, of course.

Moments later, the irony sinks in. Every one of them seems happy to share all those funny photographs, witty Wall postings and status updates with everyone on the world. They just don’t want to do it in public, in person.

Ha Ha!  So the only way to really protect yourself from yourself and others is to live in an empty barn and keep the barn door shut!!!