…if the minds of living beings are impure, their land is also impure, but if their minds are pure, so is their land. There are not two lands, pure or impure in themselves. The difference lies solely in the good or evil of our minds. – Nichiren Daishonin, from his writings, page 4.  Written in 1255.

On being woken today by my clock radio, I heard that one of the two soldiers killed by the ‘Real’ IRA attack threw his unarmed body on top of the 19 year old Domino Pizza delivery boy, Anthony Watson,  to shield him from the bullets.  This was initially reported here in The Belfast Telegraph.  Almost to no avail, though.  The gunmen advanced towards them and shot them all as they lay prone on the ground.

We’ll soon determine which of the two young men it was, but I’m reminded of the words of the prophet Jesus, someone whose sayings have been an excuse for much of Irish and the World’s troubles.

“Friend” refers to a fellow human being, and the act is one of those continuing, astonishing acts by ordinary people that remind us that there is “good” as a concept, in humanity.

Following this act, another bunch of hoodlums called the ‘Continuity’ IRA have killed a policeman, as if to validate the justice of their cause and make a point of their own power.  The timing is no co-incidence.  The real reason is that were being left out of the show and shown to be ineffectual.  Their twisted logic meant that they had to do the same. 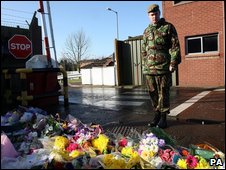 It’s to be expected that all the politicians of all flavours would “express disgust” etc about the killings and that they would say positive things about the peace process continuing.   It’s also to be expected that friends and commanders of the service people would express fine words and sentiments about their fallen comrades.   All these things happen every time someone dies out of time or in such a fashion.  In fact bizarrely, it’d be unusual if they didn’t.  All human life is precious. 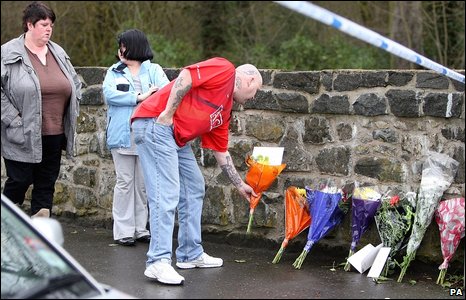 But what is really heartening, is to see the large public response of disgust to the killings and worry about the consequences.  With the obvious exception of the Omagh atrocity (also the rira), the people of Ireland as a whole have had nearly 15 years of peace and a buoyant growing economy.  They don’t want to return to the bad old days of thuggery and protection rackets.  Many children now don’t have an actual memory of those times, only the stories from others.

But the response is mainly verbal, from vox-pop interviews on the street and phone-ins, say.  We need more than a few flowers. 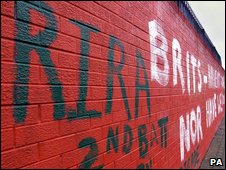 What I’d like is a nice big symbolic gesture from these people to show that the few thuggish families behind all this stuff won’t be tolerated.

Can I suggest, that en-masse, thousands gather and clean up the crap graffiti slogans that litter the walls of Northern Ireland.  Call it  Direct action for freedom from fear! I’m thinking particularly of the blood-red one pictured left.  The symbolic demonstration that ‘this is too much’ to the people nearby (who are the ones doing it, make no mistake) will demonstrate that the people won’t tolerate this stuff, and if they don’t stop, they’ll be outed.  Leaving it to the council isn’t good enough if you really, really want peace.

Leaving it to the politicians isn’t good enough either if you really, really want peace.

The painted walls as tokenised history should be next to go, but the reality of this red crap is that it legitimises the evil ideas and actions of a few thuggish types.  If you really want peace you should be prepared to assert your right to it.  Like the young soldier who threw himself onto the pizza boy.

Co-incidentally this weekend, Harry Patch from Somerset has been given France’s Highest Award, the Legion d’Honneur, at the suggestion of President Sakozy.  Since his 100th birthday, Harry has come out his self-imposed silence and spoken vociferously about WW1 and warfare and killing.  Andrew Motion wrote a poem about his life.

Now watch Harry Patch speak at Passchendaele and compare and contrast his ideas and feelings with the events in Northern Ireland this weekend and Nichiren’s words at the top.