Not being a frequent foreign traveller, my recent stop in Eisenstadt, Austria, at a 5 star hotel open my eyes a bit.  A peculiar quirk, for me, was the toilet, with a shelf, in the room’s en-suite bathroom.  I’ve since found that it’s called a “shelf toilet”, a German invention to ease the inspection of one’s droppings and save water.

It turns out it’s not that peculiar and is quite common.

There are various pros and cons for the system, one main con being that it limits the library function of the loo…

Because yes,  the main con is the pong! Your molehill sits forlornly on the shelf until it’s flushed away, thereby negating the prime reason for J. G. Jennings’ invention of underwater plop disposal by his wash-out design with a shallow pan and the U-bend.

Cunningly, the five star hotel had placed a huge jet-engine-like suction tube placed about a foot from the shelf to suck the noxious odours away.  What such a bog would be like without that on a hot summer’s day, I can imagine.  It was bad enough in winter, with a fan.  Unfortunately, although I intended to take a photo – I forgot;  one of the many things I forgot to do on that trip.  So these pictures here, are from elsewhere.  It also means my well-known bad taste is on break, so a poop picture on a shelf can be found here, if you’re interested.

A safety feature of the suction tube was that it had gauze over it so that if you fell backwards against it, your giblets wouldn’t get sucked up onto the hotel roof. 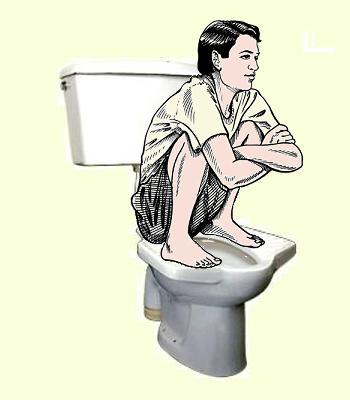 In this page at Banterist,  the posting and cumulative effect of the subsequent comments had me in stitches.  I’ve since added an extra shit type here because of it.  It’s mentioned as being common in Holland but my passage through Schiphol relieved me of that pleasure.

As a matter of toiletry interest, my favourite bogs are nice clean French crouchers – they are the wash-and-go of the crapping world.  My least favourite type, apart from a specific, memorable,  wasp-ridden open dry toilet (with a 12 foot poop drop) near Plan de la Tour in Provence I encountered, is any (of which there are plenty) dirty motorway “aire” toilet in France which need wellingtons and a shovel to visit.  They’re most common down the A7 near Montelimar (say) or round certain industrial towns near Paris.   One in particular near Bollene I’ve visited at New year and in August, and the defects are not seasonal!  The only difference was that in winter the piss lake was frozen.  It’s definitely the area  –   I’ve been to some marvels of public hygiene on the French autoroute system.

I’ve never tried the Anglo-Indian toilet pictured but it looks interesting, but not when you’re drunk.