I Wish I Was a Girl – by The Pink Fairies

Oh I tripped down the street in my fashion,
Arousing Ladies passion,
But they misunderstand my eyes,
They don’t know that I’m just after their guys.

The instrumental and vocal bit after the verse above is the best bit.  It’s a controlled use of harmonies and echo which unfortunately is buried towards the end so if you flip off before the end you’ll miss it.  This would be unfortunate as it’s one of my favourite ‘sounds’ of all time and is something that I’ve tried to emulate many times.  The bass playing subconciously sets off the root notes in your ear which aren’t necessarily the chords being played and sung, especially during the slow guitar solo (after 7:00 & 8:10 and elsewhere).  Keeping a handle on multiple  echoes is a really hard studio and playing trick to get right.

This is so right. 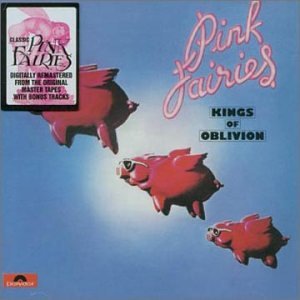 The whole first side of the “Kings of Oblivion” LP that this comes from (this is track two of three) is perfectly put together.  The Pinks never bettered this IMHO and it was all due to heart attack Larry Wallis.  He’s the addition that made the difference from their other output in reality.  “Uncle Harry’s Last Freakout” off ‘Never,NeverLand’ is the only other track that’s close.  Some of their stuff over the years was frankly appalling as recordings, I can’t vouch for live which is a different beast in my book.

There’s also a Bowie and Iggy Pop connection to this.  The LP title is pulled from a Bowie line off Hunk Dory and when Iggy & James Williamson got together to do Raw Power (produced by Bowie), they came to London to use the Pink’s rhythm section.  It didn’t pan out so the Ashetons were hired again and dragged across to London.  The rest is history.

Ron Asheton and most of the Pink Fairies and Stooges are dead.  Wallis has heart trouble or something, Iggy recently advertised car insurance on telly, Bowie is like a grand dame of the theatre now when he’s wheeled out for chat shows and Williamson is an IT professional in charge of Technical Standards for Sony USA.

It’s funny how things turn out!