Following on from this post about the protest(s) the other day and the obviously censored reporting, we can now look back for a little unheated analysis.

What’s clear to me during the event, was the useless reporting and photograph work, the news organisation’s focus on violence and the hazy halo-like glow that accompanied all reporting from the actual summit.  The last I can understand as a positive spin to it will eventually be to everyone’s benefit.  And it IS better to talk than fight so there’s a positive outcome to all of this.

What is bad though is the evidence from own eyes (or rather lack of it).  Every picture and news report we saw had hundreds of cameras in evidence.  In total there must have been more cameras than protesters!

And yet there’s hardly any real gutsy photos anywhere.  Check Google images and elsewhere – it’s the same old few dozen that have appeared globally.  So what happened to the rest?  They must have been really, really boring….

During the protests, a few pictures emerged of bloodied heads.  There is one popular one of a policeman with a bandaged head.  And yet despite the plethora of cameras, I haven’t seen one single photo of any of these injuries actually occurring – to anyone!  Did everyone turn into ‘I saw nothing’ Arsene Wegner?

We are told by the police that there were ‘about 3-500 hardcore trouble-makers’!  We were also told that 122 people had been arrested.

So what percentage of these ‘hardcore’ are actually going to court?  How will I find out?  How many were or will be convicted?  Or will it be like the 1980’s miner’s strike when hundreds were locked up without trial and none were ever convicted!! ?

As a way the endure that ‘The State’ maintains it’s power and authority this is pretty effective stuff.

The rosy glow of world leaders smiling like some X-Factor contestant’s publicity shot made certain that any uncomfortable thoughts about freedom and it’s maintenance were quietly forgotten.

Instead, we’ve been treated to quite a few photos of people cleaning the streets and worrying words about ‘the cost’ of this exercise and the cost of freedom.  Plentiful sarcastic comment was made by several news organisations about the ‘anarchists’ having the freedom to protest and I even saw a picture captioned ‘anarchists queuing for the portaloo’.   We’ve seen close-up shots of ‘the damage’ to a flower bed and bits of graffiti being hosed off buildings to emphasise the cost of all this. 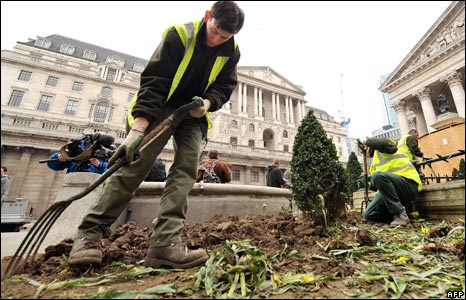 The true cost, of course, isn’t a bag of daffodil bulbs and a bit of compost from B&Q.  It isn’t the few hundred quid extra it costs to wash away the words from walls and remove stickiness from statues.

The true cost is the tera-money that’s been wasted by the actions of a few corrupt individuals and that everyone is now paying for.  Here’s what is meant by real tera:

To put it in perspective;

Instead of any of that, of course, we will all have less while the individuals responsible, almost to a man, laugh up their sleeves and go for a tan.

That’s the true cost of banking and the true clean-up cost.