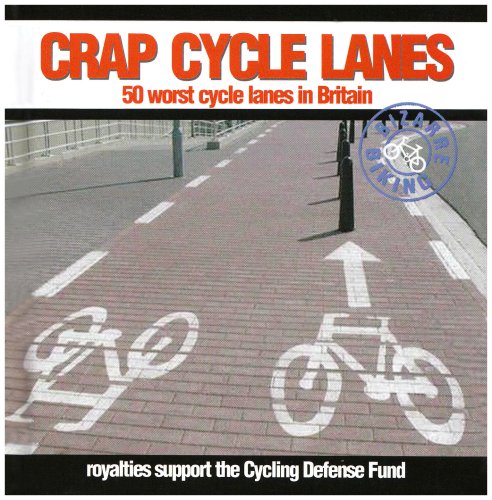 This is an unashamed plug for the Warrington Cycle Campaign.

Their dedicated work over the years has now brought in the first real 20mph zone in their town (see here).  Elsewhere on the website, is an article called The Effect of Cycle Lanes on Cyclists’ Road Space. (pdf file) …

Have a look.  The photos clearly show the effect of road markings on driver behaviour.

As an aside, now consider these road markings on this ‘safety’ photo from the Warrington Cycle Campaign’s ‘Facility of the Month‘ feature.   Just remind yourself, that highly trained road engineers were paid a dollop of cash for designing this crap. If you were a cyclist, what would you do when confronted by this idiocy?

For myself, the A38 as it hammers down in it’s notional 30mph way through Bridgwater provides even less room than the photos in the report.  I have a few dirty marks on my right elbow from vehicles that have brushed me by….

Funnily enough, if I creep along at 12mph, drivers give me about 2m room usually.  On the other hand, if I’m cycling along at 26mph they give me about 0.5m room – work that one out!!!

The cyclists in Bridgwater don’t make it easy though.  Motorists are inured to the bizarre cycling which goes some way to  validating their behaviour.

In my journeys to and from the office, I’ve characterised two main types of (adult) cyclist.  Children & teens don’t count.  Adults should know better.

So the people with lights cycle on the path – and vice-versa.  Complete madness!  As bad as the road marking engineers!