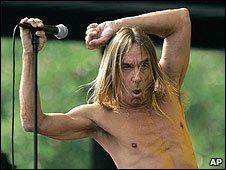 Earlier this year when Ron Asheton died, I remarked (see Nazi Ron Dies) that it was funny how life takes us on different paths.  James Williamson is now an IT executive for Sony and Iggy Pop is doing car adverts…

Well, it turns out that there’s been a problem with that.  The Advertising Standards Agency (ASA) has said that the advert is banned because the company SwiftCover Insurance didn’t insure musicians and Iggy wasn’t insured with them as he said in that wacky advert!  Most companies don’t apparently.  (I can’t believe this as I know several musicians and performers and I can’t believe that they’re all driving around illegally!)

But it’s all now okay.  SwiftCover now insure musicians and Iggy now has a policy.   oooh…  rock and roll lifestyle.

Ron Asheton is still dead.  Some things you can’t change, as J.K. Rowling has said many times as she bumped off a character or two in Harry Potter.

This is the ad: