Too Little, Too Late, Gordon Brown

This morning, PM Gordon Brown told Andrew Marr that he wants to ‘clean up’ parliament.
He wants a ‘code of conduct’ for MPs to follow.
The thing is, there’s already a code of conduct – it’s called the law!

All we,  ‘the people’ want, is to have reasonable laws and for people to follow them, equally. 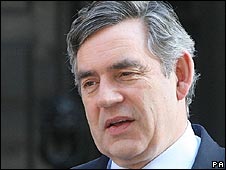 Members of Parliament are special. They have special responsibilities. In a nutshell, they represent us in the speaking house, the parler-a-ment. This simple fact makes them special. Within the speaking house they are allowed to say quite derogatory things about each other which in the outside world could be libellous. But this is the nature of the game. This is the special status that exists in Parliament for our representatives so that they can speak without fear or hindrance.

This simple freedom seems to have been forgotten.

Now they must all watch what they say, toe the party line, think of the future and their reputations…… Big Brother watches everything.

Now they think that they need extra-special status and self-justifiably grab whatever beneifits and remunerations they ‘think’ they are due.

This is the show we have now stumbled upon; evading tax, feathered nests and the nepotic practices of a third rate African despot, that is.

From left to right of the ruling classes, they’re greedily identical. Depending on how much wealth they currently have, their aspirations to further wealth naturally vary – but the greed in their minds is the same.

The PM Gordon Brown has said he’s appalled and shocked by the revelations – despite being one of the ringleaders during the information-blocking process!   Now, in a further devious twist, in the interview, he’s not-so-subtly trying to shift the focus away from MPs again!

He just can’t stop it, can he?   He’s in total denial and his brain is in action debt!  Fiddle, fiddle,  fiddle.  Hide, hide, hide.

So yet another ‘code of conduct’ is supposed to be the panacea!   It’s just staggering ineptitude and a total denial of the events in recent financial history where our money systems, all obeying a ‘code of conduct’, all visibly folded. And he wants more of the same?

He says that he,

This is the “smoke and mirrors” distraction, which could be all well and good, especially in the champagne-bottle-strewn corridors of the BBC.  Unfortunately for Brown, these institutions are already ‘code of conduct’-ed to the gunwales!

We need a Code of Conduct Czar we’ve got so many!  Call it OfCodeOfConduct!  OfCon for short, with the emphasis on Con.

All changes since 1997 have been a Brown/Blair initiative. This means it’s their idea and their fault.  He can’t pass the buck!

Like MPs expenses, the power for change is as directly in his hands now as it always has been, and it’s disingenuous to shift blame again. He’s Prime Minister for fuck’s sake! If he can’t do it, what’s he for?

In fact, it reveals the depths of psychotic deception to which our leader, Gordon Brown, will plummet in a vain quest to change Britain (to what?) before the axe falls on him. He’s frantically grasping at straws, trying to stay afloat in the maelstrom of his own creation and management.

This psychosis means that all his good works (and to be fair, there have been many); minimum wage, better family allowances, better health service, 12 week operation wait, new hospitals, better child care, rail electrification etc;  they are all as nought.

And if this future government is a bunch of Nazis then we’re in big do-dos.

Because the bad things that Brown & Blair have started – e.g.

…many of these won’t be rolled back. It’s that chip-chip away at freedom. Eventually when it’s all gone, then there’ll be a realisation. And if we don’t fall into the Maelstrom, there’ll be a bloodbath in it’s place…

What Must be Done?