Sorry to keep banging on about this, but the new laws in the UK which severely limit our freedoms and liberties gained over centuries should be compared to the current Zimbabwe situation and then taken forward in time as a thought experiment.

The nearly current state of affairs in the UK I’ve summarised here in this post.

Currently we are still a reasonably civilised place to be……….. but the ease with which the bad people can get a hold cannot be over-emphasised……..

……..so just suppose the right wing nasties get in by shooting enough of their venom at the immigrant population and stirring up the doleful public to vote for them. (I can’t see any left wing nasties on the horizon currently)

The current laws can then be used to make it treasonable to disagree with their views.  And what then?

Look at the following quote from a BBC article today.  It relates to Zimbabwe and the paranoid Mugabe.

A Mr Tendai Biti, of the Movement for Democratic Change (MDC), had been detained on treason charges(…) Mr Biti’s release on bail came two weeks after he was arrested. 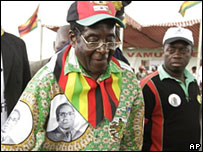 He has been charged with treason, which carries the death penalty, and also with publishing false statements and insulting the president.
His bail was set at one trillion Zimbabwe dollars, the equivalent of about $200 (£100).

The court said that Mr Biti had to remain in his home, hand in his passport and the deeds to his house, and report once a week to a police station.

Now compare this story to the UK or the USA where the premier/president is routinely ridiculed and all actions questioned.  A lot different eh?

But the thing is, it’s not.  It only takes a small shift, much like what the Republicans will be doing soon to vilify Obama, and just like they did at the last two presidential races. 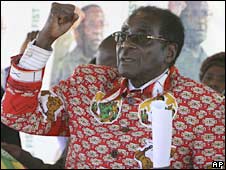 The Florida vote rigging hanging chad excluded voters scandal demonstrates that in the grubby contest to remain in or gain power, we in the west are not far removed from Mugabe and his 5000 cronies.  We in the UK are following the USA and their Patriot Act to the edge, and if we are not vigilant, over the edge.

On the subject of Mugabe and his psychotic coats.  I think they’re covering about three bulletproof and stabproof vests.  Nobody can be the shape he is – I mean really – look at him.  There’s more than a man stuffed in there.

What’s he frightened of?  He’s won the “vote” and killed off all opposition in more ways than one.