I saw some news today that apparently gives some creedence to the idea that music is what makes us human.  It’s here: 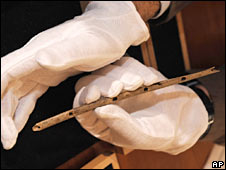 A flute carved more than 35,000 years ago has been unearthed in Germany and scientists believe it is the world's oldest musical instrument.

The academic in charge, Nicholas Conard, said that the development of music probably helped social cohesion in our ancestors, making their survival and our own existence, possible!  This is because the artifact was found with some homo sapiens bits, although this isn’t stated in  the article, so I’m surmising here.  It was in a German cave.

This seems like a very plausible thing.  It’s saying, in the article, that Neanderthals (who died out), didn’t have have such art and culture.  The “experts” are saying that we are here because of music!  These flutes are 35k years old.

And Here’s the Problem

The article starts with the phrase:

After 50,000 years of silence, the music of a prehistoric flute has been heard once again. This 50,000-year-old Neanderthal flute was discovered in Slovenia by Ivan Turk, pictured. Does it contain clues to the musical scales used by the ancients?

Now even the thickest amonst us must surely be able to see that 50k years is older than 35k years in the past?

Not only that, but 50k years ago, these musical instruments were being made and played – by Neanderthals! The cave was in Slovenia (see better article by clicking on image at left), which isn’t that far really, from Southern Germany, the site of the latest discovery.

Unless there has been further research into the previous (2000) work and the dates have been revised, Nicholas Conard needs to change his whole theory!  That is, it’s complete, un-substantiated, bollox!

That’s the trouble with news in the summer.  No-one checks anything.