Hanny’s Voorwerp is a new type of astronomical object that’s been found by a Dutch woman as part of the Galaxy Zoo project.  The BBC were the first English speaking news outlet to pick up on this, here:

Hanny Van Arkel,started this caper after she read a book by Queen guitarist, Brian May, of all things. 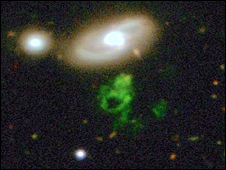 The Galaxy Zoo uses the pattern recognition ability of us humans, to catalogue all the zillions of galaxies in the sky into various classes; ellipical, spiral, barred spiral, etc.  Humans are very good at this – it’s part of our make-up that allows us to recognise faces and predators in the trees, say.  Machines can do the work automatically, but because not all objects are presented to us in the most optimum orientation, they fail on the hard stuff, of which there are many examples.

Hence the Galaxy Zoo started with loads of people volunteering to peer at pictures of galaxies and classify them.

It’s a fantastic communal effort that puts most nations and narrow-minded national governments and organisations to shame.  The projected 30,000 folk has actually panned out at 150,000 so far!  Kevin Schawinski is one of the people who devised the project.  A very simple idea with big results.  But like all great ideas, only obvious after the event!

So fair play to Hanny and well done, Mr May.  I bet you never saw that coming when you decided to complete your astronomy degree!

It’s that “interconnectedness of all things” thing again.

As for the object, big brains will be thinking about that one.  It’s one of a kind, so far.