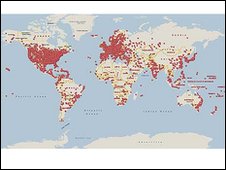 I had about half the usual quantity of spam this morning.

Maybe this is a consequence of Microsoft’s action against a huge list of domains which have been thought to be controlling thousands of computers in a botnet?  Dubbed Waledac, the botnet is thought to have  chucked out 1.5 billion spams from ~90k computers controlled by 277 domains.  They reckoned in 18 days last December ~650 million spams went to Hotmail alone….

Microsoft called the technical and legal action Operation b49.

Most ‘experts’ reckon it’s a small reprieve (as do I), but it’s better than nothing.  As it’s said,

Do Nothing, and Nothing Will Happen

One Response to “Less Spam Today”